Barcelona are giving out the message that they are incredibly satisfied with their new signing Robert Lewandowski. The Polish forward becomes their biggest marquee signing since the arrival of Antoine Griezmann in 2019 and President Joan Laporta has spoken about Lewandowski’s global impact for Barcelona.

Yet some have questioned the wisdom of investing so much money in a soon-to-be 34-year-old. In addition to his wages, Barcelona shelled out €45m (plus €5m in variables) for Lewandowski, even though he only had a year left on his deal at Bayern Munich.

Speaking to Sky, former Bayern and Liverpool midfielder Dietmar Hamann has opined on the matter, more or less declaring Bayern the winners of the deal.

“I think they are happy that he has gone. This whirlwind of signings began and he made some statements.”

Diario AS carried his quotes and Hamann went on to explain that Lewandowski was likely responsible for the high price.

“It has to be said that Bayern behaved very well and very professionally. Lewandowski did [Bayern] a huge favour with his statements. Without them, [Bayern] probably never would have been able to get the price that they obtained. As distasteful as his exit was, Lewandowski did Bayern a huge favour.”

Continue watching
It is an interesting theory and it isn’t the first time Barcelona have been up front about their desires in the transfer market. Before a deal was done with Bayern, Joan Laporta spoke publicly about their pursuit of him. By declaring such an interest in players, they risk being held to ransom by clubs.

That said, Barcelona will be happy with their strategy in the signing of Raphinha, who apparently turned down more money at Chelsea to force a deal with the Blaugrana.

Final offer made for Depay 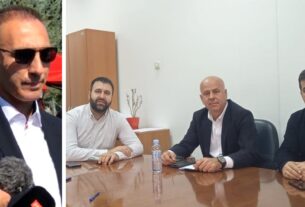 About 400,000 people sign to exclude Haaland from the Premier League